Vibration calculation in the sector of luminaires

PHILIPS Lighting called out PHIMECA for the development of its Heat Sinks luminaires.

PHILIPS Lighting, global leader in the lighting industry, called out PHIMECA for the development of its luminaires, especially for the Heat Sinks.

PHILIPS designed a new heat sink, of higher performance, to optimise its production cost (manufacture procedure, weight, material…). The mission of PHIMECA was to ensure the conformity of the product regarding the current normative documents in terms of mechanical strength under dynamic loads.

In the course of this project, PHIMECA realised complete mechanical calculations using FEM simulation (Finite-Element Model) of the luminaires and directed the implementation of the vibration tests performed with a collaborating laboratory. 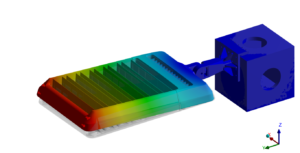 1 – Preliminary study and calculation: identify a fracture risk thanks to simulation

First, an engineering stage (calculation/design) was carried out in order to optimise the probability of success of the mechanical test. The luminaire was modelled by finite-element using ANSYS Workbench to apply to it dynamic changes seen during the tests.

From the available test results on this luminaire, a recalibration of the numerical model was performed to improve its representativeness. The numerical analysis of the shock calculation showed levels of permissible stress inferior to the material yield point. On the other hand, the numerical simulation of resonance endurance allowed to identify a fatigue damage too high, showing a risk of crack initiation.

To solve this issue, PHIMECA proposed both localised reinforcements on the Heat Sinks and a material providing better properties under cyclic load to obtain a better fatigue resistance.

3 – Preparation of the new test specification

PHIMECA then prepared the implementation of the test stage to perform in laboratory. A test specification detailing the established protocol was created. This document contains in full all the information pertaining to the proper realisation of the test, namely: assembly conditions, tightening torque, load levels, tests order, number and position of the accelerometers, measure sensors.

4 – Test assembly: calculation and design of the tooling to mount the product on the test device

PHIMECA also took over the design of the parts allowing to mount the luminaire on the laboratory test device, an electrodynamic shaker. The finite-element calculation of the tooling allowed to check their proper mechanical strength and to ensure that the test assembly is not modifying the dynamic behaviour, modal behaviour and natural frequencies, of the tested luminaire. 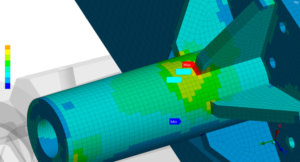 Finally, the project was successfully closed with the realisation of test in laboratory. Every vibratory change was applied to the luminaire. The Heat Sinks resisted to the shocks and no cracking sign was detected. PHIMECA provided PHILIPS with a test report summing up the principal results obtained during the tests and ensuring the qualification of the Heat Sinks regarding the norm of mechanical strength under vibratory load. 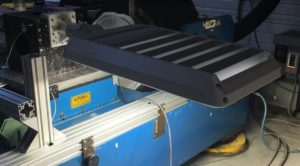